The way she appeared

suddenly just outside the gallery door alarmed me.

I can’t say she looked at us as much as she looked through us, her expression blank and dry despite the humid Charleston heat.

My first outing of this recent day was a lovely morning walk with my brother as we photographed hundreds-year-old churches and through a fence examined the stockades that held slaves awaiting their eventual sale. On the way back to the quaint hotel in which we had been staying comfortably, with its free bottles of water and sodas and its afternoon wine and cheese pairings, we traveled past the site of a former Freemason headquarters and, incongruously, a modern motel. As I sat in my air-conditioned room, I thought of the peace of the boardwalk that had seemed so enchanting and wished it were cool enough for me to spend the day there alternately watching the passersby, reading my novel and getting lost in

thought — a perk of paid time off.

During my second outing, my family spent the late afternoon wandering in and out of galleries, antique stores, and trendy shops. It was outside a gallery dedicated to the preservation of birds that we encountered the girl.

“Can you help me get some food,” she asked blankly.

Generally, I am quick with a few dollars or even twenty if I’m feeling particularly generous, but this day I shook my head “no.”

While the girl faded from view, my guilt did not. “I should have given her something, but I don’t like pulling out my wallet on the street. I usually try to keep a few dollars in my pocket just in case,” I told my 15-year-old nephew. Though it was true, it felt like a cheap excuse. My nephew nodded, and we walked on.

“You don’t need a plan; you just need to be present.”
― Bob Goff

At some point, my nephew went off with his sisters; my brother escaped the prospect of having to spend more time shopping with me and wife; and my sister-in-law and I continued to look for deals where we could spend the money that was burning holes in our pockets. After a half-dozen or so stores, I purchased a top I was too lazy to try on. I texted the kids: “Where are you?”

Their response: “Leaving the pizza place and heading to the drug store.”

We remarked at their ability to eat so often and continued our leisurely stroll from one store to another until the shopping strip turned into a park. Again, I texted the kids.

Their response: “We are still at the drug store.” So, that’s where we headed. 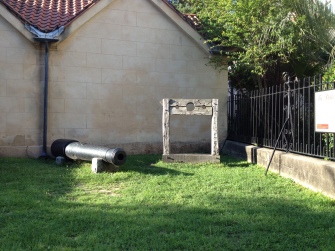 We found the kids, looking rather serious, gathered near the cash register.

“Aunt Leslie, Mom,” said my younger niece, “This is Beverly.”

I looked around trying to understand to whom she was referring. She pulled  the homeless girl forward.

The woman who was homeless.

The woman whose last living relative died just before she and her husband lost their jobs.

The woman who came with her husband to Charleston for a better life but found hardship sleeping in the park and being turned down for work because they hadn’t been homeless long enough get into a shelter and didn’t have a phone number to give potential employers.

The woman who so badly wanted to take a shower, wash her hair, and put ointment on her many, inflamed mosquito bites.

Beverly: Who said, “It’s embarrassing to have to live like this.”

I couldn’t help but wonder what we were going to do next. Were we to head back to our cozy hotel rooms and order overpriced room service while Beverly looked for a soft spot in the grass or an open space on a bench? Were we to settle in under the covers of our queen-size beds while she swatted mosquitoes?

I pulled out my phone — part of me was screaming who does this? — and requested the number for the motel I’d seen on my morning walk. I asked to book a room for a few nights for another person. As they took down my credit card information and informed me I would need to present that card at the front desk, Beverly asked my nieces, “What’s going on? What is she doing?”

No one answered Beverly’s questions. As we walked to Beverly’s motel room with her bags and her food, I handed her the keys and told her she would have three nights in a room with a phone and a shower. Her eyes grew wide and a single tear fell to her cheek. Then we stood in a circle and prayed for Beverly’s future.

Is there anyone so wise as to learn by the experience of others?

The walk back to our hotel began quietly, until my nephew praised my younger niece for being so helpful.

“Well, I only bought the toiletries,” said my oldest niece, “because you bought the pizza.”

“I only bought the

pizza,” said my younger niece, praising her little brother, “because he gave her money.”

“I only had money in my pocket,” said my nephew, “because Aunt Leslie told me to keep some there just in case.”

My eyes welled up with tears as we let out a collective, whispered “wow.”

I don’t know if those few nights in the motel, the food and the sundries helped change Beverly’s life for the better, but they certainly changed mine.

For I know the thoughts that I think toward you, saith the Lord, thoughts of peace, and not of evil, to give you an expected end.