Despite a tumor blinding his left eye when he was a toddler, Jay Asquini has never been short of vision. What he didn’t picture, though, was an accident that would thrust him from a lucrative career as a charismatic photographer into early retirement as a painter.

Observing one grandfather return home to cheerfully discuss his self-owned business and another grandfather return in a foul mood after an aggravating day in the corporate world, Asquini determined at a young age he would be self-employed. His initial plan was to turn his love of literature into a career as a writer. In his mind’s eye, he would be the house husband who sent his wife off to work and kids off to school before he retired to his IBM Selectric typewriter and banged out the great American novel. When Asquini’s parents gave him a camera on the Christmas of his 19th year, he embarked on a duo career as writer and photographer.

“The mechanics (of photography) made sense to me,” says now 60-year-old Asquini. While most photographers have to adjust their vision when looking through a camera’s viewfinder, being blind in one eye makes looking through a viewfinder no different than the way he already sees the world. “A lack of binocular vision has never bothered me.”

While Asquini started making money with the camera right away, he found creative writing and freelance copy writing for ad agencies difficult pursuits. The rewrites seemed endless and billing confusing.

“I found photography an easier environment.” Projects had simpler start and end dates, he says. “There’s a lot more responsibility as a writer, especially as a creative writer because you’re responsible for everything. A photographer has the subject. There’s a form of reality no matter how much creativity goes into it because of the subject.”

After about three years of defining himself as a writer and photographer, Asquini clarified his career. Instead of sticking with the dream he had, he created the dream he was meant to bring to life. He made writing a hobby and put the bulk of his energy into photography.

“Photography was part of my personality. It was part of who I was. There was this great reward. I worked from home, with my wife running the office and the studio in the back of the house. The kids grew up in that house. All the things I got hired to see and all the people I got to be with, I loved it. It was infectious, too. I would work with other photographers and we would say we had the best job in the world.” 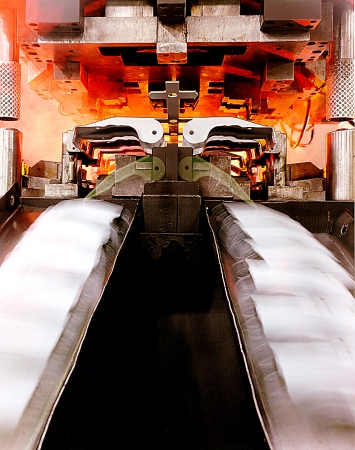 Press in motion by Jay Asquini 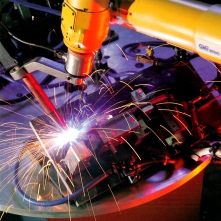 One day Asquini would find himself riding in a motorcade with the visiting president of Armenia and the next photographing the Detroit Red Wings or the manufacturing processes at a plant. He says he found an easy home in the industrial photography world.

“I didn’t press engineers into doing something creative and outside of their comfort zones. Instead, I could find the beauty in what they were doing and how they were doing it.”

Unlike working in an office, Asquini found he could approach photography with his own personality. “I was never anything but myself, so I never made sense in the ad world. But I did belong with the engineers, the people who built and designed things and turned them into products. That all made sense to me.”

He wasn’t just skilled at industrial photography, he relished its many challenges. There were no film or lights made for the poorly lit and unpredictable manufacturing facilities.

“It’s hot and loud, it can be dangerous, and your images can end up grainy. What you think is a table you can lean on might actually be molten aluminum. There are a lot of crazy things going on that you don’t have control over. But if you can learn how to control those things, you can be a great photographer and land on your feet in any situation. If you can learn how to be creative in that scene too, you can be even f****** better.”

On August 26, 2001, Jay Asquini decided it was time to remove a tree from his yard, but he wanted to do it in a way that wouldn’t damage the pine tree below. After considering carefully, almost obsessively, where he should place the ladder, he secured it, climbed up, and began trimming back the over-hanging branches. Then the tree broke and sprang free. Asquini grasped the ladder. But the blow knocked him from the ladder and on to the back of his neck, pulverizing five of his vertebrae.

Thankfully, Teck Soo, MD, a spine and brain surgeon Asquini calls “my beautiful human being,” put him back together with titanium rods and screws. He says, “I was one millimeter away from being a quadriplegic.”

For Asquini, the worst day in recent American history was also one of the best days of his life. On Sept. 11, 2001, he learned to walk again.

“With the aid of a walker, I took three steps to the TV and watched the towers collapse,” he says without joy.

A few days later, Asquini was home and looking forward to resuming his work. “Doctors couldn’t see why I couldn’t just pick up where I left off.” But cameras can be heavy and Asquini couldn’t seem to hold one easily. Neither could he maneuver the camera or his head so he could see through it properly. The rare times he could operate the camera the way he wanted, he found he could not simultaneously hold a conversation with his subject.

A recent sketch of Jay Asquini by Rachel Holland from Asquini’s collection.

“The banter is what helps to dissolve the camera and makes the camera disappear so the subject doesn’t feel like a hunted beast of prey,” Asquini explains. “You feel collaborative with the photographer. But I could only do one or the other, look through the camera or engage.”

Oddly, Asquini understood how to talk and shoot photos, market himself and do everything necessary to run his business; yet he couldn’t actually perform the steps, and no one could explain why.

A year later, Asquini realized his skills as a photographer weren’t coming back. “It was something I had to give up.”

Putting down the camera, picking up a brush

Asquini says he slipped into a deep depression and found himself “in a dysfunctional space.”

“I couldn’t even manage to say the right things to get an appointment with a psychiatrist. As a guy who was never at a loss for words, I found myself becoming one of those frustrated, irate people because I couldn’t figure out why they didn’t understand what I needed, because I didn’t have the capacity to explain myself properly.”

A friend insisted they start painting and Asquini agreed. To his surprise, he fell in love with the process. Years of photography work and watching his mother, a painter, gave Asquini a solid understanding of what light and composition do.

“It was liberating from a creative side. I could paint whatever I wanted and wasn’t bound to my subject. I could use any color I wanted and any lighting I wanted without having to actually use lighting. Now all I had to do was visualize what I want. No one would go about painting the way I do without being a photographer first. Every dimension is used.” 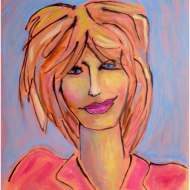 From Jay Asquini’s collection of Beltrattos – Paintings of Individual Beauty

From Jay Asquini’s collection of Land and Cityscapes paintings 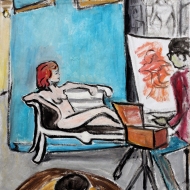 “The Artist and Model” painting by Jay Asquini 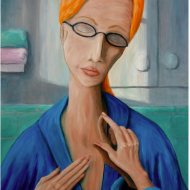 Jay Asquini in front of some of his works. 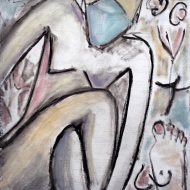 “Figure and Symbols” by Jay Asquini

Asquini says he looks for dynamic compositions within a scene rather than the whole scene and makes small four-by-six or five-by-seven sketches that he stores the way he would old negatives.

“As a consequence, I have hundreds of little gems. I don’t need them to be large because I spent years looking through contact sheets. These are the frameworks for things I paint out larger.”

Except he wasn’t able to sell his work. Though he knew from his experience as a photographer what needed to be done to market himself, he collapsed each time he tried to implement those strategies.

“I couldn’t complete things,” he says. “This is where I realized I was dealing with a different brain.”

Three years after the accident, he finally got an appointment with a psychiatrist. After testing, the doctor helped Asquini understand that in addition to damaging his spine in the fall, he also suffered a closed-head injury to his brain.

Now he has what he calls a binocular mind. “I remember what my old mind was capable of performing and now I have this ‘de- tuned’ version that just cannot do the things the old one could do.” He says being able to remember his old brain while dealing with his new brain can be simultaneously irritating and enlightening. “Now I say I have two different perspectives on life.”

He also has learned to redefine his identity. When asked, Asquini can now say he’s a painter without prefacing it with “I was a working photographer for 20 years.” If people press about his new calling, he says he adds “hobbyist”.

“I don’t make an effort to sell my work. I remember how much effort it takes from my old brain, and I don’t have that. Painting is the joy.”

“It’s not perfect. I have physical limitations. I wish I could stand up in the park and paint like others do. But if you’re an accountant, you have real limits…

Story 1: Two artists uncomfortable with the “actor” label share their views on identity because they are both so much more.

This story: See more of Jay Asquini’s paintings on his Tumblr page.