Happy happenstance is when you complete “1984” and catch the first two episodes of “The X-Files” reboot in the same week. Think about them too long, though, and a sickly feeling might overcome you.

Reading George Orwell’s tale of a government’s all-consuming need to meddle destructively with humankind and the lengths we would go to make them stop was me fulfilling the first Shelf Improvement1 book challenge of 2016. The task was to reread a classic book (something 50 years old or older) that you read in school. Orwell wrote “1984” in 1949. I first read it nearly 35 years later. 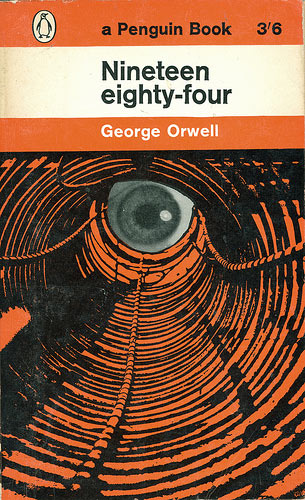 Reading “The X-Files?” I did that for the aliens, growths, creepy siblings and dry, subtle humor alluding to the many years that have passed since season 9 aired to a world without — for the most part — social media. Yes, creator Chris Carter’s story of FBI agents Fox Mulder and Dana Scully investigating strange phenomena successfully managed nine long seasons without a hashtag. In part, the show’s success stems from Carter’s mission statement, “It’s only as scary as it is believable.”

According to John Ross of Caritas St. Elizabeth’s Medical Center in Boston, Orwell’s success in making “1984” believable in part had to do with his health. In 2005, Ross published a study in m.LiveScience.com asserting Orwell’s bouts of bacterial pneumonia, dengue fever and tuberculosis “made him a better and more empathetic writer, in that his sense of human suffering made his writing more universal.”2

Did Orwell’s ill health make his work predictive as well as well as universal? Is “X-Files” believable because it skirts close to the realm of possibility?

Many argue whether art imitates life or life art, and I don’t care to rehash that fight. I do know, however, that watching what’s happening worldwide with governments and technology (who’s listening to whom?), watching “The X-Files” and rereading “1984” make it clear that conspiracy theorists aren’t to be taken lightly.

“X-Files” special agent Mulder (played by David Duchovny) reinforces that thought when he rants that aliens aren’t the problem, but sketchy humans who misuse nano-, bio- and other technology are the problem. He and an Alex Jones-like character (played by Joel McHale) cite FEMA concentration camps, weather control and a collection of additional questionable actions that conspiracy theorists have proven true as proof that the public indeed is being manipulated. The question is by whom? The government? Well, that’s a big unwieldy entity. The unknown conspirator, like Big Brother, seeks to use innovative minds to destroy a way of life and control the future.

Side note: I am a tech geek… with an English degree. I am far from technologically savvy; however, I am curious. I write news stories and fiction about tech; and I believe there are some brilliant people using technology, like virtual reality headsets for terminally ill children, for positive transformation or inspiration. That said, I believe technology can be effective without being invasive.

In “1984,” everyone has a telescreen. Those on the other end of the telescreens regulate every portion of the collective lives, what they said and did as well as what they might say or do.

“Always eyes watching you and the voice enveloping you. Asleep or awake, indoors or out of doors, in the bath or bed- no escape. Nothing was your own except the few cubic centimeters in your skull.” George Orwell, “1984”

A few years ago, “Dateline NBC,” “20/20” or one of the other be-scared-be-very-very-scared TV news magazines revealed the ease in which hackers can access an individual’s computer to listen and watch them unawares through the PC’s camera.

Nowadays, we purposefully allow invasive technology into our homes — to make life simpler. On the low end of the spectrum (I think), my television learned what time I most frequently turn it on; so, according the Sony manual, it turns on faster during those times.  Early last year, TechCrunch.com reported on the privacy statement associated with Samsung’s “smart,” voice command-enabled TV. 3 According to the statement, Samsung might collect what users were saying when the TV was listening (even if it wasn’t a direct command), transcribe that information and send it to a third party… to improve service.

“Doublethink means the power of holding two contradictory beliefs in one’s mind simultaneously, and accepting both of them.” George Orwell, “1984”

For a while, there was some hoopla in the news about Samsung’s statement. Eventually, the company apologized, and then the news faded away without word of people destroying their televisions or of the market seizing from the dearth in purchases. Life went on. We accepted tech’s new role.

A few days ago, I called a bank and its telephone artificial intelligence informed me I needed to set up a voice-recognition password to use the service. For some reason (baaaa), I did. I repeated a phrase three or four times until the computer recognized and possessed a record of my voice.

Today, a source copied “Amy” on an email, requesting “she” send us a meeting invite. Shortly afterward, I got an invite from Amy Ingram, an artificial intelligence service, which negotiated times and days until we came to an agreement on when we would meet.4

The book and television episodes were entertaining and enlightening; but the more I reflect, the more I realize they are downright scary visions of our possible futures. Think about it too long and I can’t help but want to put a beer bottle on my doorknob.5

So what do we do? Toss our TVs, laptops and tablets on the trash heap? Swap our smartphones for landlines — if they still install them in your town?  Dump our everything-enabled cars for a Deuce and a Quarter — if you can find one that hasn’t been “upgraded”? I mean, I love my Sirius and rear-view screen, which was developed (at least in part) to decrease the number of accidental deaths and injuries.

A friend and former news colleague, Gary, is notorious for restoring what a group of us call “serial-killer” cars. Steel monstrosities that take a half a city block when parked. Currently, he is driving a 1979 Buick Electra 225 with original parts (all working) and an interior that’s just a few swatches away from DayGlo green. Gary has a plan to outwit all the connected sheep like me.  When all other vehicles like choreographed swimmers are traveling down the highway — synced with the road, traffic lights, each other and the mothership — he’s going to cruise. He will barrel through traffic; because as, he put it, the tech-enabled cars are going to part like the sea when they predict (wrongly) he’s going to hit them if they don’t.

But would he ever leave his location-enabled cellphone and Facebook friends behind? Unlikely. Could he outrun the neighbor’s drone? The Electra is too easy to spot. And what about his kids, should he ever have them? Will he disabuse them of the thought that visiting a Disney park is an American-given right just because of the “magical” wristbands that “enhance” the Disney experience (and send use data back to the company)? 6 Don’t count on it.

The point is this: Fiction or not, “The X-Files” is a good reminder that we need to speak up and speak out when we know the creep (illegal human experiments7) and conspiratorial factor of industrial, medical and whateverical technology is too high. Otherwise, it won’t be long before we are living in a more extreme version of Orwell’s Oceania with Blade Runners as Thought Police.

“Replicants are like any other machine – they’re either a benefit or a hazard. If they’re a benefit, it’s not my problem.” “Blade Runner”8