“ ‘Accounts are not quite settled between us,’ said she, with a passion that equaled my own. ‘I can love, and I can hate. You had your choice. You choose to spurn the first; now you must test the other.’ ”

I am an introvert; accordingly, it is not intuitive for me to ask personal questions of people unless I am reporting a story, and it has been a long while since I have done that. But I have fallen into this rabbit hole called blogging; and well, now I need something to blog about. That means going out and doing more, talking, and, most of all, watching and listening more. Consequently, I have chosen to train myself to inquire more of others beyond commenting asking that generic “how’s it going?” question that rarely elicits a substantial response.

What started off as an experiment from a dubious social scientist is paying off. In recently talking to a student and employee at a local diner I frequent, I learned a few things:

“Be miserable. Or motivate yourself. Whatever has to be done, it’s always your choice.”

“Given a choice between grief and nothing, I’d choose grief.”

In my practice conversation, I asked the woman—we’ll call her Amy—how medical school was going. Turns out, she just finished her first year but found it far too stressful to continue and dropped out. Unfortunately though, her parents have given her a mandate: Become a doctor or be disowned.

Before settling on getting a bachelor’s degree in English I had a few (ahem) college majors: Marketing, criminal justice, psychology, sociology, journalism, and eventually English. Those were the official majors. I also “focused” on film, anthropology, and art history. The problem was I enjoyed nearly every elective I took. As a result, I delayed making a decision about my major and graduated with considerably more than the minimum number of credit hours.

Even if a long list of other degrees have pingponged around Amy’s brilliant long-haired head, it it seems Amy has only two choices: Become a doctor and maintain a relationship with the parents that raised her and the cousins, uncles, and grandparents here and abroad whom she calls family… or not. Tough choices.

“Character is the sum and total of a person’s choices.”

While Amy’s action items are limited, she has an abundant of choices when it comes to attitude. She can select to fret, get angry, or to dwell in a positive state. Choosing joy should not be a tough choice but for some of us, joy does not seem like an option. Instead, we cherry pick and wind up with a basket of bitterness, unforgiveness, worry, condemnation, and so on.

Upon recently making the difficult choice to change not only jobs but also industries, I a 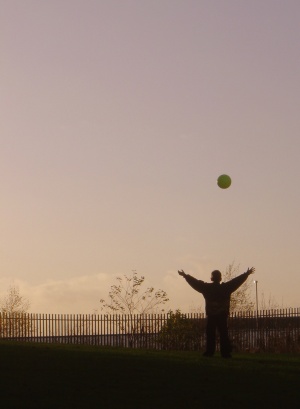 m now working with a new team. One person on my crew—let’s call him Ralph—is probably the happiest adult I have ever encountered. Being a grizzled, jaded former journalist, I at first thought something was wrong with Ralph. He is so incredibly gleeful that he bounces when he walks, often walking through the office on his very tiptoes. What I have learned, though, is Ralph just chooses to be happy. He is quite intelligent and knows what he likes and does not.

Me: I am not much of a conversationalist; I am not good at talking to people I don’t know.

Ralph: That is the most important thing in life! That’s how you learn!

When people are being more negative than he prefers, Ralph plainly turns away from them, choosing not to participate. When Ralph finds a funny joke, photo, or video to share—even if the time may not seem appropriate to others—Ralph shares, because it makes him glad. As a result, he spreads that gladness.

Now that is a choice worth making.

© Leslie Green and Wildemere Publishing LLC [2014]. Unauthorized use and/or duplication of this material without express and written permission from this blog’s author and/or owner is strictly prohibited. Excerpts and links may be used, provided that full and clear credit is to Leslie Green and Wildemere Publishing LLC with appropriate and specific direction to the original content.